The most significant revolution in the modern workplace since computing has indubitably been the rise of mobile technology. Remote workers, road warriors, homeworkers, and employers have all benefited from a more-balanced lifestyle and, for the latter too, from huge productivity gains.

The consumerization of technology has led to a situation where there is almost an expectation that technology will be available to use at work in every environment, even ones which seem potentially hazardous to delicate hardware.

But the mobile revolution has its own cost burdens. As hardware increases its complexity, there’s a higher chance of damage. Expensive laptops, handhelds, or tablet devices, taken on-site or away from office environments, are susceptible to damage.

Not all devices are created equally. There’s always been a distinction between consumer and commercial hardware, in notebooks and laptops. And even in tablets and handheld devices like smartphones, there are models considered more suitable for business use than others. However, there exists another level of products, known as ruggedized products.

Rugged systems are built to comply with military standards, meaning they are tested for extreme endurance and strength in the field – shocks, vibrations, bangs, temperature and scrapes. 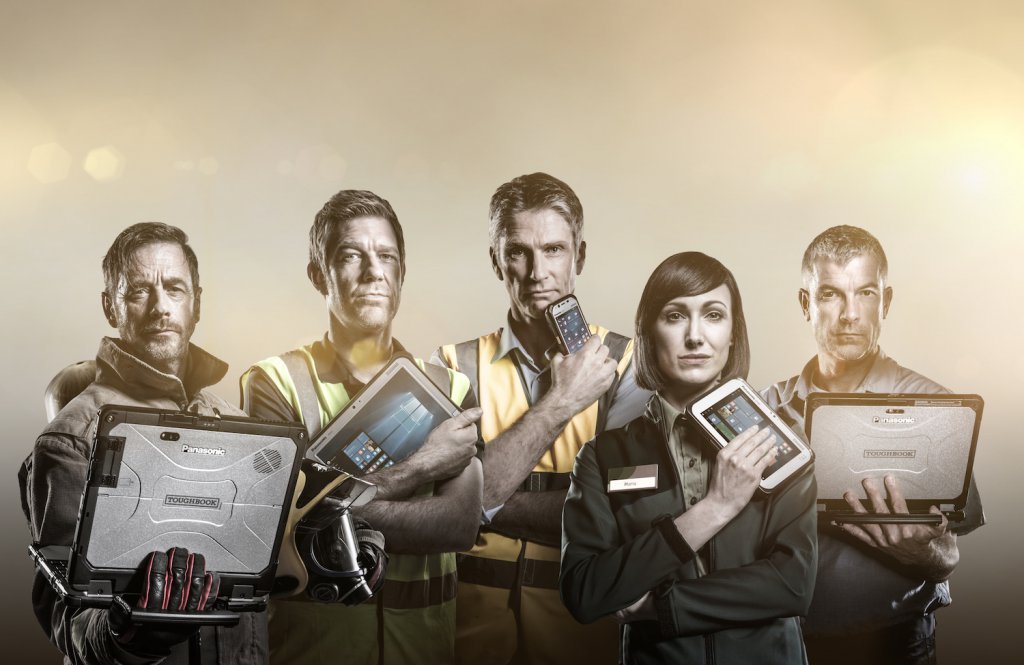 While military standards are useful as an indicator of potential longevity, they only tell part of the story. Hardware needs to be usable in extreme conditions — not necessarily conditions which pose a danger to the technology itself. For instance, displays may need to be viewable in bright daylight, batteries may need to be swappable on site for prolonged use away from a charging point, and ports and connectors could need to be ruggedized too: high levels of resilience to wear and tear over time is just the start.

Due to a number of factors including industrialization and the falling price of silicon, hardware’s costs are falling, and the temptation can be to equip a workforce with cheap, low end, semi-disposable hardware for use in the field; even in potentially hazardous and testing situations. After all, if a device may come to harm, why spend good dollars on it?

But research undertaken by renowned analysis firm IDC shows that the return on investment in ruggedized hardware pays off quickly — in the first year for tablets and handheld devices such as mobile phones, and over two years for laptops or notebooks.

The IDC survey studied responses from over 800 organizations across a range of industries. It found that 11.5 percent of devices used outside “standard” office environs or the home are likely to fail in their first year. And over five years, the likelihood of failure is nearly 22 percent.

Put in simple terms, a consumer or commercial device has over a one in five chance of spluttering to a halt before its rightful time is up.

Device types’ failure rates varied only slightly, with notebooks or laptops failing within the first three years; only very slightly more often than tablets or smartphones over a similar time span. 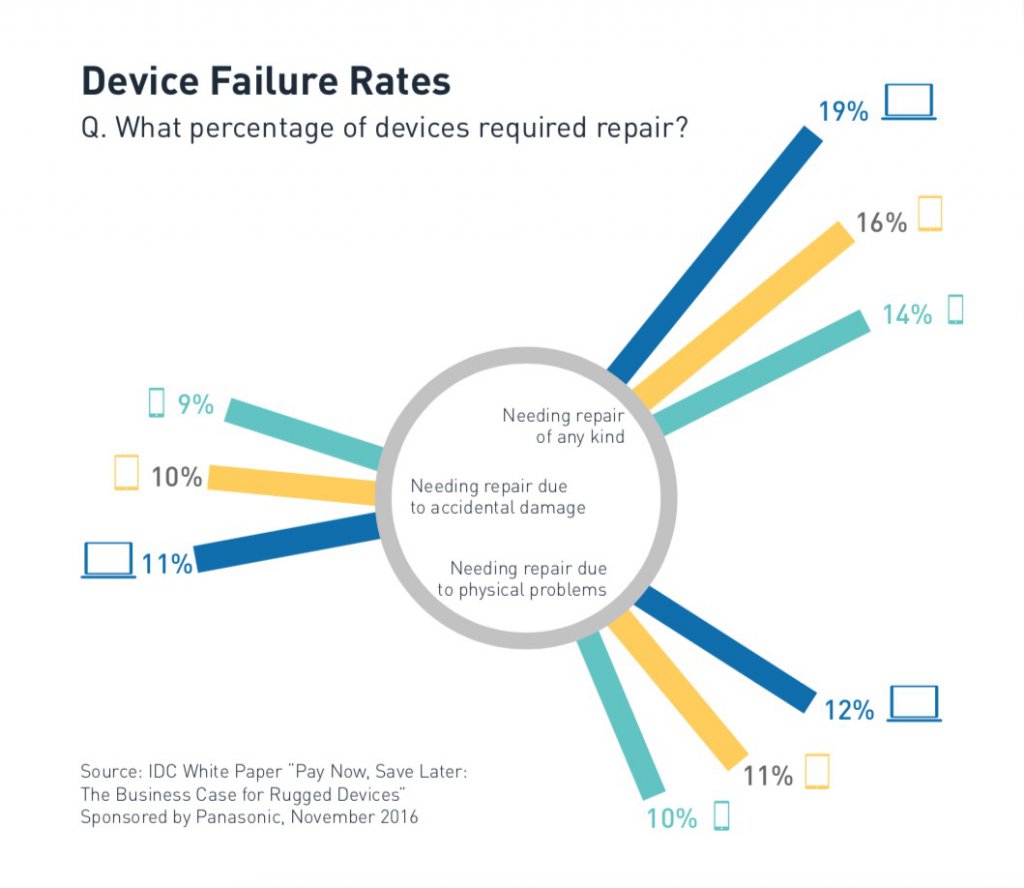 Across all devices, displays were found to be the most susceptible component, followed by – if applicable – the keyboard. Batteries and chassis also failed significantly often, and third place for damage went to storage — typically HDDs or SSD/flash-based memory. In the case of tablets & other handhelds like smartphones, ports or connectors also ranked amongst common failures. 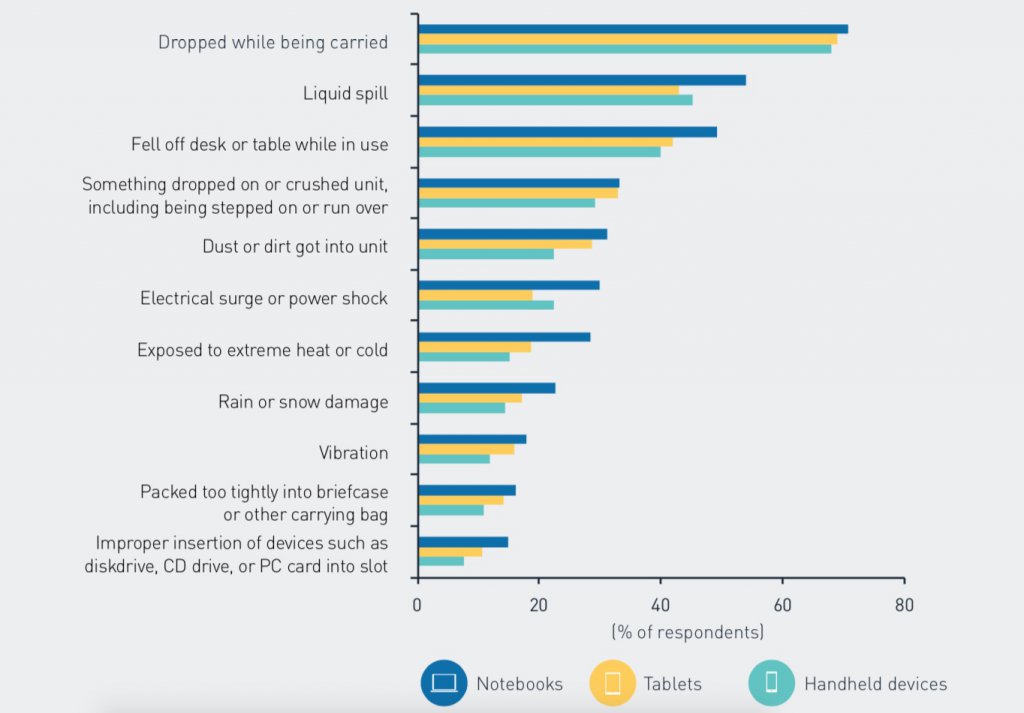 The primary cause of damage was dropping, followed by liquid spills. Tracked damage types read like a series of descriptions of extreme working environments, including incidents involving dust and dirt, electrical surge or power shocks, and exposure to extremes of heat & cold, rain or snow.

Crucially for the enterprise, offline devices typically caused two areas of cost. First among these was the loss of productivity of workers who were unable to use their device. Secondly came the additional repair or replacement costs – and the time of those tasked with the repairs, of course.

According to the IDC survey, in addition to lost working hours of the owner, loss of data also had a severe impact, as did employee dissatisfaction, and significantly, customer dissatisfaction.

Downtimes varied depending on the organization’s mitigation systems and routines, ranging from less than two hours for a few lucky employees, to more than two full working days in some cases. On average, downtimes across the board were around six to eight hours — essentially, a full working day for each damage incident.

Total amelioration costs, IDC found, often dwarfed what one would consider being a reasonable purchase price of a shiny, new, high-end model. A notebook or laptop repair, lost productivity, out-of-pocket-expenses, and so on, totaled an average of US$3,863 – more than the most expensive MacBook Pro 15″ with TouchID.

A tablet repair’s total cost? US$2,658. The result of smartphone or handheld device being damaged bears a princely US$3,314 cost, or, to put it another way, the price of half a dozen mid-range (and accident-susceptible) smartphones.

While the purchase, initially, of a ruggedized device costs more, the difference is recouped typically within one year for handhelds and two years for a laptop. Given that an average PC has around a three-year average refresh cycle, taking a high-end ruggedized device out of the office (even into potentially hazardous places) makes sound business sense.

Readers wishing to consider their options should, as a starting point, use this handy return on investment calculator, supplied by Panasonic. 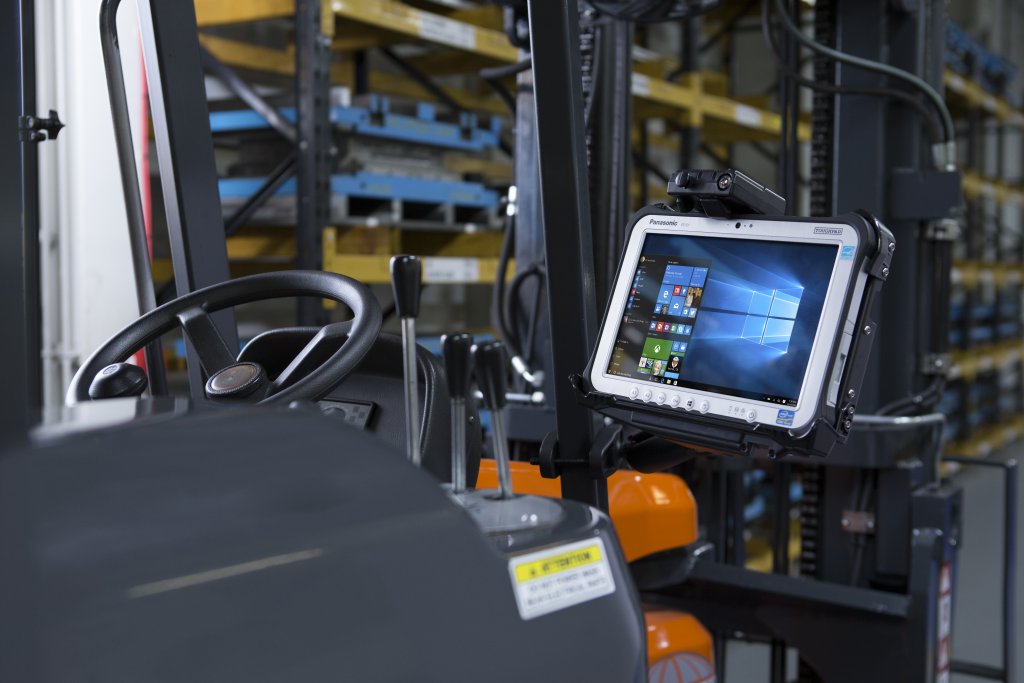 In the past, heavy, unattractive and cumbersome ruggedized devices gave the market for off-the-desktop technology something of a patchy reputation.

However, the latest crop of devices from Panasonic (powerful, sleek, fast, and safe) are ideally suited to the needs and requirements of today’s mobile workforce. In the IDC survey, many disastrous damage events took place with the device in the owner’s luggage – so these aren’t machines just suited to war-zone journalists and the military. If you work mobile, you need the best – and so does your finance department.

Industries like healthcare, transportation, public safety, and retail are using mobile working solutions more. These aren’t necessarily dangerous environments per se, but they pose enough of a danger to hardware & data to make all the difference between a cheap Chinese import and a ruggedized Toughbook.

To learn more about Panasonic’s range of ruggedized handhelds and laptops, speak to a representative today.