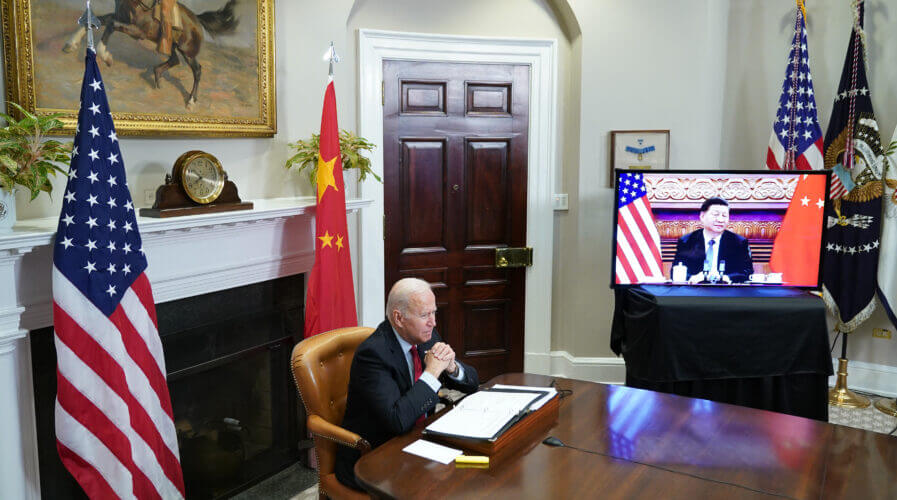 While the US gathers allies, China silently achieved semiconductor breakthrough

In December 2020, the largest chipmaker in China, Semiconductor Manufacturing International Corp (SMIC), was put on a US entity list, halting American equipment suppliers from providing the Chinese company with gear “uniquely required” to produce 10nm and more advanced chips. The ban, first imposed by former President Donald Trump, was based on national security concerns, citing the company’s ties with the Chinese military–which SMIC has outright denied.

It hasn’t been easy for SMIC ever since, as the blacklist status hurts its ability to develop sophisticated technologies. Making matters worse for them, the company’s capability has been severely curbed also because of its lack of access to ASML Holding NV’s extreme ultraviolet lithography (EUV) systems, which are required to make the most advanced chips that include 5nm and 3nm geometries.

For context, ASML Holdings has a monopoly position in the production of advanced chip-making machines. Unfortunately, the Dutch firm has not shipped a single EUV machine to mainland China because of US pressure on the Dutch government intended to cripple China from making cutting edge semiconductor chips, such as those used in the latest smartphones.

At this point, the Chinese semiconductor company relies on less advanced deep ultraviolet (DUV) systems from ASML to expand its capabilities, focusing on using mature 28nm and above technologies to produce chips for cars and home appliances, rather than for high-end smartphones and tablets, which have moved onto more sophisticated chips.

However, what the US and perhaps the rest of the world knew about SMIC may have been limited, considering the latest revelation by industry watcher TechInsights. Based on a blog post last week, it was revealed that the Shanghai-based manufacturer has been shipping Bitcoin-mining semiconductors built using 7-nanometer technology. For starters, that’s well ahead of SMIC’s established 14nm technology, a measure of fabrication complexity in which narrower transistor widths help produce faster and more efficient chips.

Although SMIC has not made any public comment about the possibility that it has achieved 7nm capability, the type of chip has apparently been in production since last July, according to TechInsights. To put things into context, considering the fact that the US has barred SMIC from the unlicensed sale of equipment that can be used to fabricate semiconductors of 10nm and beyond, the breakthrough could in fact mark a technological milestone for the semiconductor company.

Prior to this, SMIC has said that its core capabilities stand at 14nm, two generations behind 7nm, which in turn is roughly four years behind the most advanced technology available now from Taiwan Semiconductor Manufacturing Co. and Samsung Electronics Co. The company has worked with clients on technologies more advanced than 14nm as early as 2020, it said on an earnings call that year.

Frankly, analysts and industry experts actually believe it is technically possible for SMIC to produce 7nm chips with existing DUV systems, under the leadership of co-CEO Liang Mong Song. Basically, in a widely-circulated resignation letter from Liang in December 2020 that he later withdrew, he wrote that he had led a 2,000-strong engineering team to complete the development of 7nm technology at SMIC. At that point of time, he indicated that the company could start trial production in April 2021.

To be clear, China’s SMIC is shipping a foundry process with commercially available chips in the open market which are more advanced than any American or European company. While the US has high hopes for Intel to rise, there are currently no Intel 7 class foundry chips commercially available for purchase and they still have to build out their foundry operations. The most advanced American or European foundry produced chips are based on GlobalFoundries 12nm.

After more than two years of back-and-forth, the US Senate and House only recently passed the Chips and Science Act, a reflection of the bipartisan consensus in Congress over the need to counter China’s technological rise. Ironically, the US’s moves were borrowed from China’s playbook in that it provides federal funding for private sectors deemed critical to national security.

But the American lawmakers took their own sweet time, and amidst all that, SMIC achieved a semiconductor breakthrough with its 7nm technology. But legislation is not the only weapon the US has in store. President Joe Biden has also been pushing for a ‘Chip 4 Alliance’ with three of its allies including Japan, South Korea and Taiwan. Even that move angered Chinese officials but it isn’t any easier for US allies like Japan and South Korea. Both the countries’ semiconductor industrial chains are deeply integrated with the Chinese mainland market, further complicating the situation.