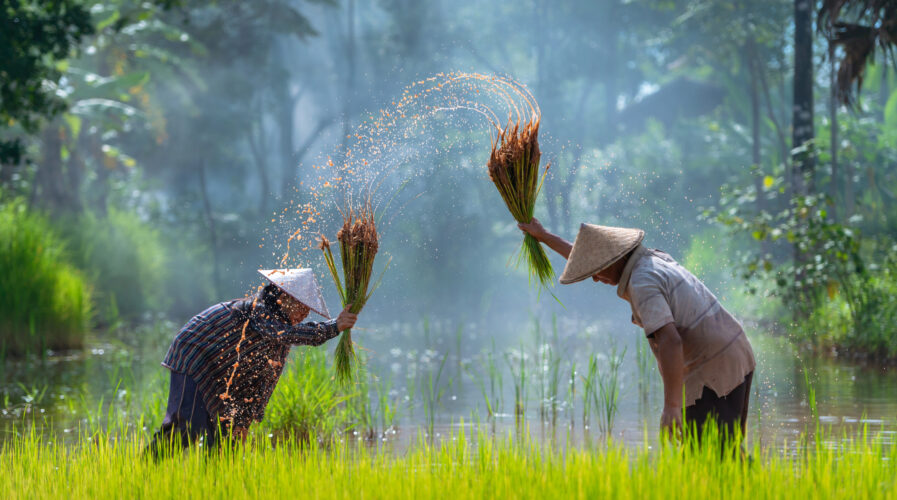 While the technology is in many ways still nascent, it seems already that only a small few of the world’s commodities have yet to be traded using blockchain.

Most of these dalliances seem to peter out quickly, but there are a small number of cases where perseverance and commitment has seen the potential of small blockchain projects begin to flourish.

Agriculture, led by rice production, comprises around one-third of Cambodia’s GDP and it employs 80% of the population, according to the International Finance Corporation. Rice plays such an important role in the country’s economy that Cambodia’s Prime Minister has even referred to the commodity as ‘white gold’.

Playing such an integral part in the country’s economy and the sustenance of its citizens, it’s no surprise that steps are being made to ensure that producers are being paid fairly and that origins can be traced back to source.

Amru Rice is one of Cambodia’s leading rice exporters and has been developing its BlocRice technology project since April 2018. The company has been rapidly scaling up the platform from 50 household farmers to one that now comprises 500 across two communities.

The goal of BlocRice is to ensure farmers can sell their product at a higher price and that the country’s main food sources can be identified.

Since its original pilot less than two years ago, the platform has become commercially viable, assigning digital identities to individual farmers, and ensuring their goods can be tracked from rice paddies all the way to the consumer. It seeks to give farmers a ‘voice’ in the supply chain, and help them to optimize and grow their operations through cooperatives with other producers and access to tech solutions and extension services.

Thanks to blockchain’s key tenets – the immutable storage of data, visible in real-time to any party provided with access – retailers and consumers can gain clear insight into how their food was produced and just how much the farmers that made it are really benefiting from the industry.

Kann Kunthy, vice-president of Amru Rice, Cambodia told Khmer Times: “Our goal is to utilize blockchain technology for millions of households not only in rice but all agricultural crops.”

Kunthy’s view is that the use of blockchain and other innovative agritech solutions can both help to modernize and enrich a traditional industry, helping to turn seasonal household farmers into commercial, professional farmers that are market-oriented.

Projects such as BlocRice can also stimulate the growth of the country’s fledgling tech industry, both fostering and attracting new talent and technology firms into the region.

However, Kunthy said that digital infrastructure and innovations such as these can thrive only if they are matched by physical infrastructure support, such as logistics, transportation, post-harvest management, storage and delivery, which requires training, education and the further establishment of agricultural cooperatives. The ultimate goal, she said, was to help Cambodia’s farmers become ‘agri-preneurs’.

Nobody seems to downplay the importance of Cambodia’s white gold to its economy. The country’s government has invested in the building of silos, warehouses and rice million machinery, and is seeking to attract foreign investment to work on processing, as well as considering lowering the electricity tariffs for farmers.

Across Asia, the risks driven by climate change and, more recently, the effects of COVID-19, have contributed to declining produce outputs and farmers are struggling to make sites both sustainable and profitable.

But the contribution of the agriculture sector has been steadily declining from 2003 towards 2016, as shown in recently released World Bank data.

At the intersection between agriculture and next-generation technologies, agritech is a fast emerging area of focus for innovative entrepreneurs and startups, seeking to leverage tech like IoT, analytics, AI robotics and blockchain to drive efficiencies to save costs and increase yields. Wider goals in agritech are frequently to boost standards of living for a huge part of the population and drive sustainable agriculture practices.