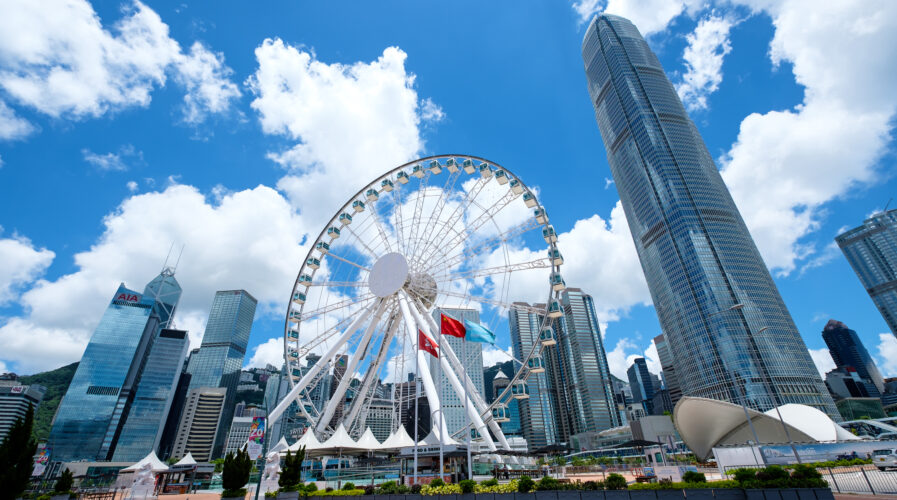 A city in the clouds. Source: Shutterstock

Is Hong Kong the most cloud-ready market in APAC?

Awareness around the enabling role that cloud computing provides us – not only in the private and public sectors, but in our everyday lives – has never been higher.

Across APAC, cloud adoption has been on an uptrend even in territories that have been traditionally slow to embrace new internet services, and that increased acceptance is reflected in the 2020 Cloud Readiness Index, by the Asia Cloud Computing Association (ACCA).

The Index has become a definitive indicator on the market preparedness to adopt cloud computing tools and services in APAC over the last decade. Rankings weigh up a number of factors to determine nationwide readiness including International Connectivity, Broadband Quality, Data Center Risk, Cybersecurity, Privacy, Government Regulatory Environment, among more, and a sustainable practices criteria called Power Grid, Green Policy, and Sustainability.

Interestingly, both Hong Kong and Singapore rank higher than the UK (which would achieve a 79.7 score using the same criteria) and the US, which at 76.4 would rank behind third-placed New Zealand in APAC.

New Zealand scored an overall 77.1, maintaining its third position from the previous Cloud Readiness Index, but its neighbor Australia dropped slightly in overall score to seventh in APAC. Rounding out the top five in the region is Taiwan and South Korea with total scores of 75.2 and 72.7, respectively. 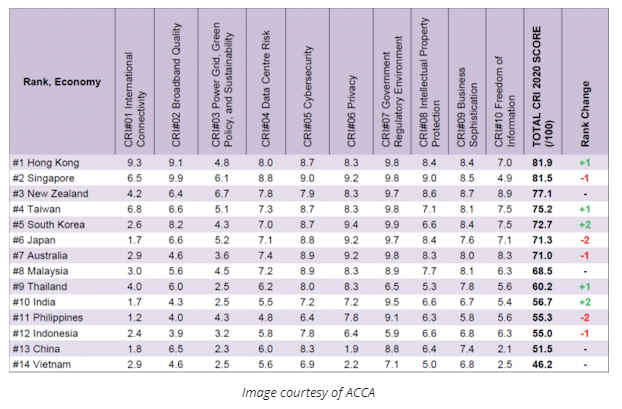 International Connectivity tracks how much bandwidth capacities have grown in each nation between 2018 and 2020. Japan was not the only digitally matured economy to struggle in this metric, as China (1.8) and South Korea (2.6) also scored poorly as bandwidth connectivity is already quite widespread throughout these countries.

Another interesting point of note is that Singapore – which according to Deloitte has the best cybersecurity preparedness in Asia Pacific as well – rated an impressive 9.9 out of 10 when it comes to Broadband Quality, and 9.0 and above in Privacy, Government Regulatory Environment, and Intellectual Property Protection, alongside Cybersecurity.

Those individual scores align well with the international perception of Singapore’s friendly regulatory environment for doing business, ahead of Hong Kong on several individual counts. But Hong Kong’s consistent good grades across all criteria snagged it the top spot as the most consistent cloud-ready economy on the Index.

The ACCA’s report findings also noted many APAC nations are actively looking into emerging tech such as artificial intelligence (AI), internet of things (IoT), and augmented reality as technologies that could complement cloud computing capability and help them “leapfrog” more matured economies in the near future.

Commenting on the top performers who all ranked highly for Government Regulatory Environment, the ACCA reports that encouraging “free and secure flow of data across borders and jurisdictions” will help quicken the recovery of APAC economies post-pandemic, and spotlights “data-driven businesses of all types and sizes to thrive” in the new economic reality going forward.