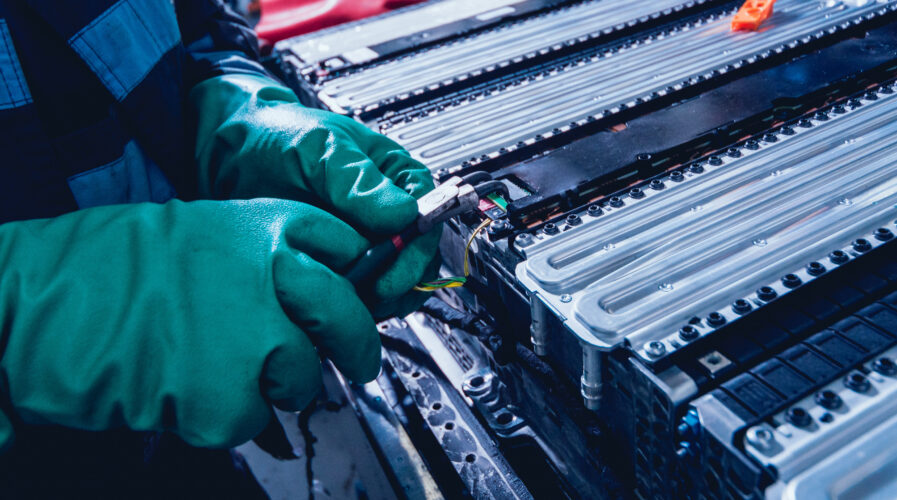 Automotive players are progressing towards solid-state batteries – sparking a change in the electric vehicles market across the East and West. Source: Shutterstock

The future of electric vehicles is powered by solid-state batteries

Out of all the electric vehicles, Lithium-Ion (Li-ion) constitutes around 95% to 99% of those batteries. This is despite the widely known fact that the rechargeable battery isn’t optimal for safety or resource-utilization. However, these days big automotive players are progressing towards solid-state batteries — a decision that is dubbed the game-changer for the EV market.

First introduced in 2015, Volkswagen kicked off the solid-state battery acquisition race when it obtained a 5% stake in QuantumScape, then Dyson acquired Sakti3, Bosch bought out SEEO, and Johnson Battery Technologies sold its solid-state batteries to BP. More electric vehicle companies joined this game, such as BMW partnered with Solid Power, Ionic Materials worked with Hyundai, although in 2017, both Bosch and Dyson abandoned the two companies they acquired in 2015.

Then in 2020, we saw further interests in solid-state batteries for electric vehicles, such as the newly developed solid-state batteries based on argyrodite electrolyte by Samsung, and a further US$200 million investment by Volkswagen on QuantumScape. Besides those, Toyota, Honda, Nissan, Fisker, Panasonic, CATL also get involved in this game.

Why solid-state batteries for EVs?

Realistically speaking, most EVs have a range of fewer than 300 miles and it takes more than an hour to recharge their battery packs. The cells also lose nearly a third of their capacity within a decade, and they pose a serious safety risk because of their flammable materials. The decades-known solution has been the solid-state battery, and it’s simply because, instead of a conventional liquid electrolyte, the stuff that ferries lithium ions between electrodes uses a solid electrolyte.

Also, the battery’s negative terminal, called its anode, is made from pure lithium metal. This combination would send its energy density through the roof, enable ultra-fast charging, while also eliminating the risk of battery fires. As EVs account for about 60% of all lithium-ion batteries made today, IDTechEx predicts that solid-state batteries will represent a US$6 billion industry by 2030.

HOW WILL THE ELECTRIC CARS MARKET FARE IN 2021?

As it is, the battery market is currently dominated by East Asian companies. European and US firms are striving to win this race that might, in their view, shift added value away from Japan, China, and South Korea. Asia Pacific dominated the solid-state battery market with the highest share of 33.0% in 2019. From both technology and business point of view, the development of solid-state batteries has become part of the next-generation battery strategy. It has become a global game with regional interests and governmental supports.

However, high costs associated with the initial stage development of solid-state batteries are expected to hinder the commercial viability of the product, reports suggested. In addition, the growing impact of the pandemic on the market supply chain is expected to further impede market growth. Battery pack manufacturers, electrode material producers, raw material suppliers, and others have suffered a major setback and are estimated to take a significant amount of time to recover.