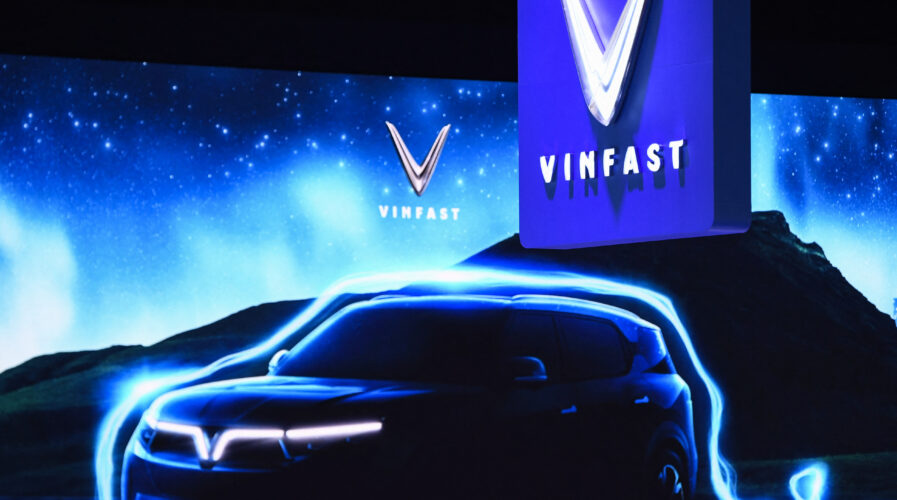 The Vingroup VinFast electric vehicle logo is displayed during AutoMobility LA ahead of the Los Angeles Auto Show on November 17, 2021 in Los Angeles, California. (Photo by Patrick T. FALLON / AFP)

With China and Japan seemingly to dominate the electric vehicles (EV) in the market, VinFast is aiming to make a mark as well in the industry. Vietnam’s flagship automaker unveiled two new electric SUVs, the VF e35 and VF e36, at the 2021 Los Angeles Auto Show on 18 November. The two new electric vehicles showcased VinFast’s total commitment to promoting green transportation and encouraging electrification to allow people to enjoy intelligent, safe, exciting, and environmentally-friendly mobility.

“We are deeply motivated to inspire our customers to be bold and join the revolution to EVs to accelerate solutions that will address this crisis. VinFast believes that the ‘Future of Mobility’ will be one of smart electric cars that are highly personalized and integrated with technologies that benefit life and our environment. These vehicles will do so while meeting safety standards and delivering superior and comfortable driving experiences,” said Michael Lohscheller, CEO of VinFast Global.

The emerging global electric vehicle company made strategic collaborations with tech companies, innovative startups, and industry partners to produce its latest SUEVs (sport utility electronic vehicles). The Vinfast design teamed up with Mahindra-owned world-renowned design studio Pininfarina, for example, captured “Dynamic Balance” with graceful curves and strong, bold trims alluding to a sense of strength and forward motion in their eye-catching looks. The VF e36 even has “Air Curtains” in the hood and front end to redirect air from high drag areas for added aerodynamics. 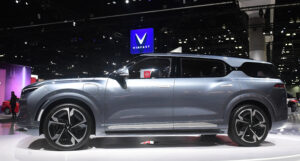 VinFast was established in 2017 as a member of Vingroup, a leading private conglomerate in ASEAN with a total capitalization of US$35 billion. It rolled out its first car, the Fadil hatchback, in 2019 from its manufacturing complex, which boasts up to 90% automation in Hai Phong, Vietnam. It began its expansion to the North American and European markets in July this year. The official introduction of the VinFast EV brand followed the announcement of its new US headquarters in Los Angeles, California, the previous day.

“We are excited to make Los Angeles the permanent home of VinFast US,” said VinFast US CEO Van Anh Nguyen. “California in general and Southern California in particular are rapidly becoming the epicentre of the advanced transportation world thanks to forward-thinking ideas, an abundance of talented workers, and the passion for making transportation electrification a reality.”

VinFast was awarded the largest ever California Competes (CalCompetes) Tax Credit to an automotive company by the California Governor’s Office of Business and Economic Development (GO-Biz) at $20.5 million. It is also one of the few foreign businesses to be given the CalCompetes tax credit. The automaker invested more than US$200 million in its initial phase and created over 1,000 new, full-time jobs in the state. It intends to hire more than 400 employees within the next several years. It develops its corporate headquarters, regional offices, a call centre, and a network of storefronts as part of its expansion into the American market.

VinFast also uses its exhibition platform at the LA Auto Show to inspire consumers to switch to EV with its smart technologies and those developed by members of the Vingroup technological ecosystem: VinAI, Vantix and VinBigData. Some innovations include its AI-powered ADAS called Routix, smart security, traffic and driver monitoring system by VinAI, and autonomous driving verification services by Vantix.

Earlier this month, it was named one of the investors of Autobrains, developer of first-of-its-kind self-learning intelligence technology for assisted and autonomous driving, led by Singapore-based Temasek.

VinFast now has three EV models and stands out with its exceptional battery leasing policies and dedicated customer care with an industry-leading 10-year warranty. Pre-orders for the new VF e35 and VF e36 SUEVs are expected to be available globally in the first half of 2022.