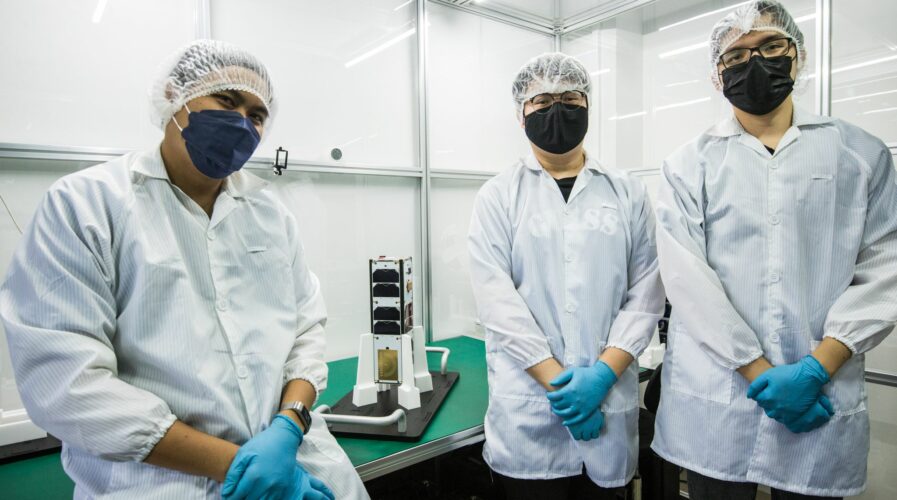 How AWS aid the rise of NuSpace, a Singaporean space tech start-up

In 2021, Amazon Web Services (AWS) launched its Public Sector Startup Ramp program in Southeast Asia, aimed at early-stage start-ups focusing on health, digital government, smart cities, agriculture and even space technology. Emerging space tech startup NuSpace has been among the beneficiaries of the program and since then, the company has been transforming Singapore into Asia’s Space Hub.

In nuts-and-bolts terms, the program provides startups with technical design and architecture reviews, mentorship, credits and support with go-to-market plans to help navigate the complex regulatory and security requirements within the public sector. NuSpace co-founder Ng Zhen Ning, in conversation with Tech Wire Asia, alongside AWS regional and Public Sector Startup Lead for Asia Pacific and Japan Samuel Harris, shared how the Startup Ramp program has allowed them to leverage on the services that the cloud giant provides.

“What it has helped us to do is to use services from our partners, in particular the Telespazio group based in Germany, because they developed a product that helps us to manage our assets in space. This lowers our barrier of entry towards the space sector, and because it’s AWS, it allows this kind of trans-national collaboration to occur. As such, because of this kind of structure, it has really allowed us to benefit and to grow our company faster than we expected it to be,” Ng shared.

NuSpace, a startup led by four individuals, basically produces Internet of Things (IoT) nanosatellites, which are satellites about the size of a shoebox that orbit Earth and can relay IoT data packets and connectivity to rural villages, remote islands or even to the middle of a desert or ocean. Essentially it is for areas that are not covered by conventional communication infrastructure.

AWS IS SEIZING THE ENORMOUS ASEAN CLOUD OPPORTUNITIES. HERE’S HOW

“Being one of the first few space companies here in Singapore, that’s like indigenious, has been challenging at the start. But these days are much easier,” Ng shared. To recall, in February this year, the Singaporean government announced that it will be investing S$150 million into space research and development to develop their space capabilities. “That’s actually a very good promise, and a good indication that the Singapore government is going big on space.

“And of course, there’s AWS that helped us at the start, without which we wouldn’t have like known the Telespazio group, and wouldn’t have been able to utilize their services which allowed us to grow quickly in terms of solutioning to make ourselves effective and cost efficient in delivering our services to our customers,” he shared.

Sharing how the services work, Ng highlighted that it depends on the customers and their requirements. “Some come to us with certain scientific experiments that they want to carry on in space, and it’s mostly research institutes. So they come to us, we design the entire mission for them, including the satellites, which we would also launch and operate to obtain the scientific information they require,” he added.

Ng emphasized that the main industries that NuSpace is trying to target includes the environmental, social, and governance (ESG), as well as agriculture. “For ESG, the application that we’re looking at currently is to monitor the growth of trees in a rainforest. Using satellite connectivity allows us to bring the data back in a very cost-effective and accurate manner,” he noted.

For agriculture, Ng said NuSpace is providing a solution to track cattle for a client based in Uruguay. “In Uruguay, there are many free-ranging farms and that makes it hard for the farmer to track their cattle for various activities, like inseminating or milking them. Besides that, it is also to avoid cattle theft, an apparent problem in Uruguay,” he shared, adding that NuSpace’s solution is also designed to monitor cows behavior and track diseases.

NuSpace is anticipating its first commercial satellite launch by mid next year and with that, the startup will start to offer connectivity-as-a-service to potential customers within the Asia Pacific region.

The bridge to public sector through AWS

The main objective for AWS when it comes to its Startup Ramp program is to help startups in developing innovative solutions for their customers and in ultimately progressing from a startup to an established enterprise. Its focus is on early-stage public sector-centered startups, which will be given access to low cost, simple-to-use infrastructure so they can launch and scale.

AWS Startups for the Public Sector

Essentially, the program consists of two categories—the Innovator Category and the Member Category—in recognition of the differing needs of startups. The former category is for pre-revenue startups, or those who have yet to generate sales for whatever reason, which mainly is the lack of product offering to the market due to “hyper-focus on ideation.” The latter category, on the other hand, is for post-revenue startups, or those already making up to US$10 million in revenue.

Interestingly, during the pandemic period, Harris shared that most of the startups AWS were working with had “unprecedented growth”. “Especially education, they were at the forefront of enabling public sector institutions to come online, even if that is as simple as having a virtual classroom, all the way through to ensuring the mental well being of students. That said, most part of the first year of the pandemic was a very reactive type of engagement with our startups as they supported large scale groups in a short period of time,” he told TWA.

Even the contact tracing or vaccination platforms in Singapore were built on AWS and that, according to Harris, is a reflection of how governments are accelerating their transformation digitally because of demands. “It is also when the Startup Ramp program comes in handy as it gives companies the access to the AWS tools, technologies and services, which allows them to very quickly build the needs of the government and scale up what they’re doing,” Harris added.