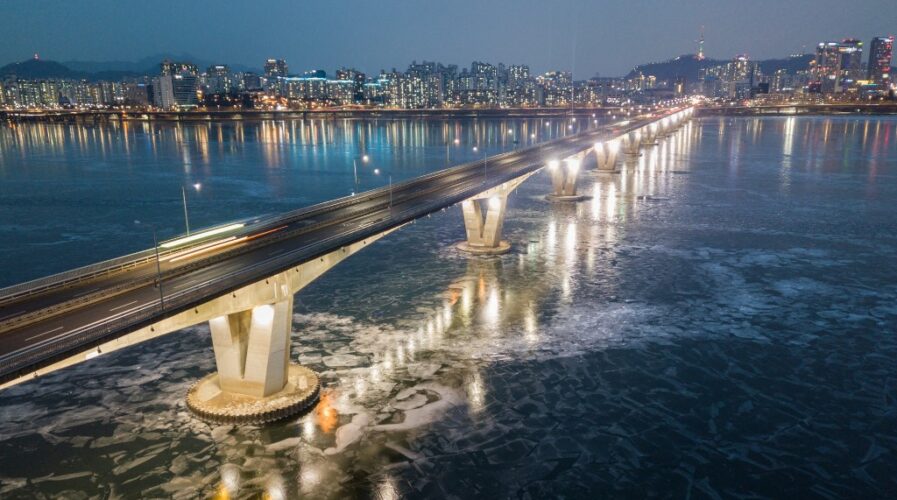 The decentralized identity approach by the Korean government promises to transform the lives of citizens, especially during the pandemic period. (Photo of the Seoul city skyline by Ed JONES / AFP)

Blockchain technology, once known for being in the exclusive domain of techies and crypto enthusiasts, has been under the microscope of the Korean government over the last half-decade. This is not because of cryptocurrencies; rather, it is the fact that the technology itself promises a treasure trove of practical uses across multiple industries, both private and public.

The government’s fascination with blockchain hasn’t just been for the headlines, though. Last year, they launched the country’s first blockchain-based digital ID in Seoul, with over a million drivers eagerly signing up for the service.

This year, they’ve done it again with the release of “B PASS”, an “integrated identity verification” app and service for residents in Busan. B PASS was developed by and operated by Coinplug, a private company offering blockchain and SSI solutions. This can be seen as rather revolutionary because Korea is one of the rare countries today that has embraced SSI (Self Sovereign Identity) as a decentralized approach to the management of citizen personal data.

It probably won’t come as a surprise to know that South Korea has been actively working on bolstering its infrastructure and smart city development from as early as 2013. As part of Korea’s smart city strategy, the government has embarked on appointing special zones that have been strongly deregulated in the pursuit of various technological testing.

B PASS: A step towards a wallet-free society

As like elsewhere in the world, the Covid-19 pandemic spurred demand for socially distanced or digital services. As Korea relies heavily on physical identification documents, the need for digital authentication measures grew even more relevant during the height of the pandemic.

Citizen identification in Busan will be a breeze as the B PASS is integrated with a variety of public and private services such as public transport, library services, volunteer registration, digital vouchers, tour services, and even for pregnant women seeking free health services.

Citizens can also use B PASS to access unmanned convenience stores securely without needing to provide personal data to third parties. Another interesting application of B PASS is with the ‘Busan Public Safety Report’ app. Users can anonymously report incidences of danger, accidents, or disasters. This helps increase data reliability, especially since citizens are incentivized to participate in filing reports with the in-built reward system.

Adopting blockchain technology is seen as a necessity by the Korean government and multiple institutions are backing its continuous research and development, including the Ministry of Science and Technology (ICT), The Korea Internet Security Agency (KISA), Defense Acquisition Program Administration (DAPA), National IT Industry Promotion Agency (NIPA), and Korea Post among others.

The existing national identification system is controlled in a centralized manner, where service providers store and manage authentication and personal information on their end. However, a blockchain-based decentralized identity (DID) approach to identity management such as B PASS will shift that data ownership to the individual instead, offering multiple benefits for them.

Firstly, issues like forgery, tampering, and theft can be eliminated due to the secure nature of blockchain technology.  Secondly, DID can prevent tampering, intervention, and unsecured access by entities other than the user. This is especially important when identification is required for verification purposes, thus eliminating privacy and surveillance concerns.

With this DID approach, the personal data of the individual is encrypted and stored directly in the user’s mobile device, instead of a centralized database. As blockchain records cannot be tampered with and is distributed across many machines, it won’t face the same security risks that normal centralized data does.

Additionally, it can be used online or offline. Tech Wire Asia understands that the technology powering B PASS is the Metadium blockchain.

Decentralized identity and blockchain: Towards a smarter and stronger economy

Speaking to Tech Wire Asia, B PASS representative Eddy Lee shared that the DID approach would impact the country in two main ways – socially, and economically. Socially, an innovative industrial ecosystem would raise awareness of how blockchain can ease the lives of citizens, and contribute towards building smarter cities around the country.

Furthermore, citizens can feel at ease knowing they retain full control over their personal information and be protected against privacy and security risks related to their identification data. “We want people to ‘feel’ and experience blockchain technology in their daily lives with services like access to public institutions, public library cards, transportation, etc.”, he added.

Economically, blockchain-based application and commercialization services will serve as a new growth engine for the economy, especially during the era of the fourth industrial revolution. They expect blockchain to enable new ideas and business models, which can lead to job creation for tech and business professionals.

In an age where sensitive and personal data are at risk of cybersecurity threats, we can only hope that more governments push towards adopting an SSI approach towards managing citizen identification data.