GSMA: Only 44% of Asia Pacific population is connected to the internet

Asia Pacific consists of 14 countries with over four billion population approximately. The good news is, mobile broadband networks, including 3G, 4G and in some countries 5G, covers around 96% of the population in the region. The downside though, less than half of the population or precisely just 1.23 billion users, according to GSMA, are using mobile internet services.

In its latest Mobile Economy Asia Pacific 2022 report, which delivers a detailed picture of the region’s adoption of mobile internet, GSMA highlighted that there is lack of digital skills, affordability and online safety concerns hindering the adoption of internet in parts of the region. Fortunately, considering the staggering and continuous growth of mobile penetration the report highlighted how the mobile ecosystem continues to contribute strongly to the economy across the region, . 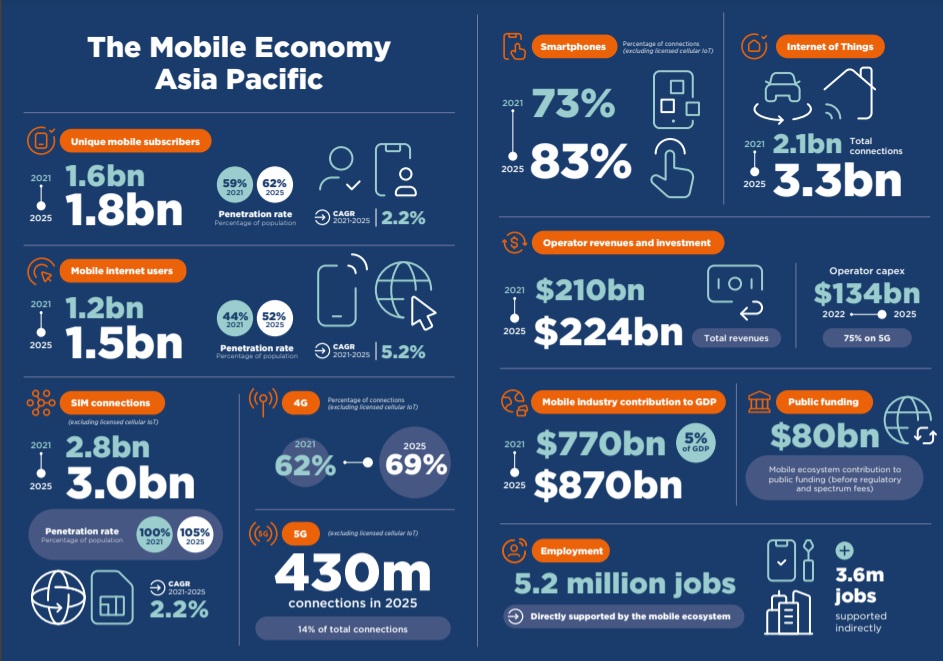 “The mobile ecosystem generates 5% of GDP across the region, which is equivalent to US$770 billion of economic value added. It also supports around 8.8 million jobs both directly and indirectly,” the report noted. GSMA’s Head of Asia Pacific Julian Gorman reckons that addressing the usage gap and extending the benefits of the internet to more people in society is critical.

“However, it will require a concerted effort by a broad range of stakeholders, working together with mobile operators and other ecosystem players such as device manufacturers and digital content creators, to drive adoption and overcome the barriers we see today,” he said in a statement. GSMA also shared that the mobile ecosystem in Asia Pacific had made a substantial contribution to the funding of the public sector, with around US$80 billion raised through taxation till date.

GSMA also forecasts mobile subscribers to grow by nearly 150 million in Asia Pacific by 2025, with South Asia accounting for more than three quarters of new subscribers. South Asia will also see the biggest increase in smartphone adoption over the period to 2025. 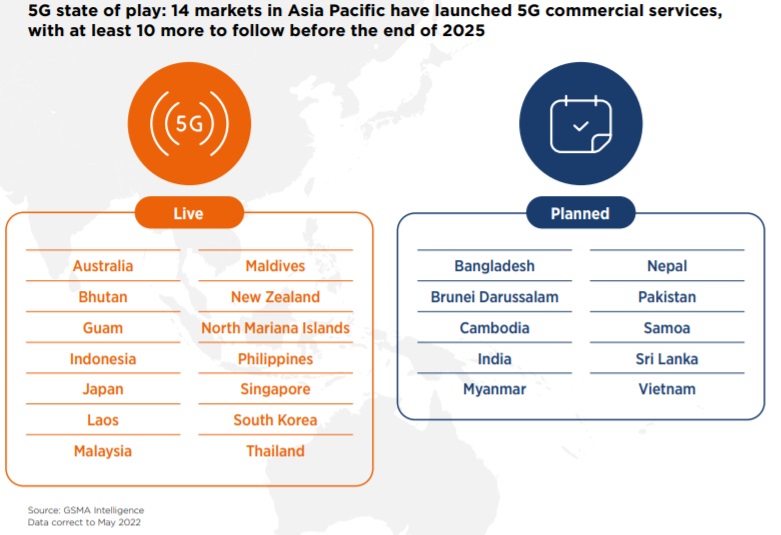 Key milestones for the mobile industry in Asia Pacific to 2025.
Source: GSMA Intelligence

According to the report, by 2025, there will be more than 400 million 5G connections in Asia Pacific, equivalent to just over 14% of total mobile connections. “The figure will be much higher (67% on average) in developed Asia Pacific, which comprises Australia, Japan, Singapore and South Korea,” it said.

In those markets, 4G adoption has begun to decline, GSMA suggested, however, the technology still has significant room to grow elsewhere in the region, particularly in South Asia and Southeast Asia. Overall, the whole Asia Pacific region will see 4G adoption peaking at 71% in 2023, before declining to 69% by 2025, GSMA highlighted.

As the metaverse ecosystem is growing in many countries around the world, Asia Pacific is no different. GSMA said it has been demonstrated by the interest of public agencies and private enterprises in establishing a presence in the metaverse and actively utilizing the platform in their engagement with customers and other stakeholders.

For an instance, South Korea plans to spend at least US$186.7 million to create its metaverse ecosystem, as part of the country’s Digital New Deal. “Other governments in the Asia Pacific region, both at national and provincial levels, have outlined plans to harness the potential of the metaverse to increase the efficiency and quality of public services, as well as improve collaboration between local and national government agencies,” the report noted.