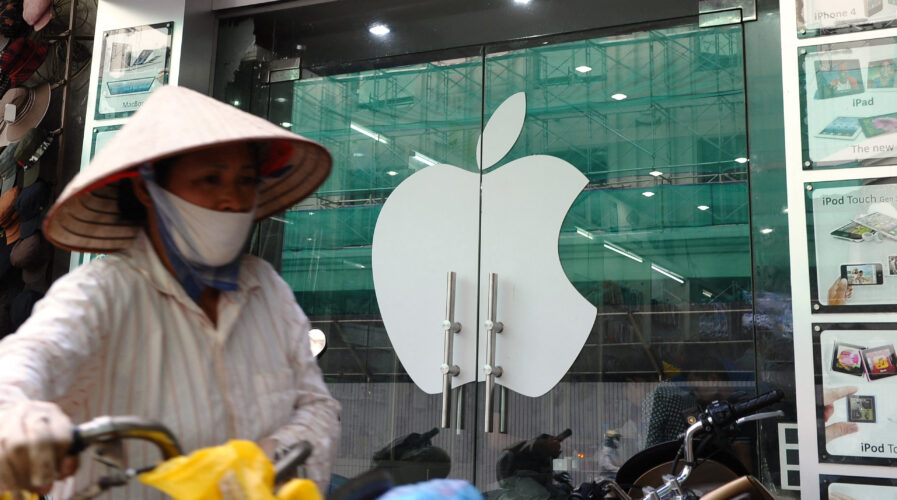 From made in China to made in Vietnam: Apple is relocating its watch, MacBook production to SEA.(Photo by HOANG DINH NAM / AFP)

From made in China to made in Vietnam: Apple is relocating its watch, MacBook production to SEA

If there has been one apparent winner from the trade war between the United States (US) and China — it is Vietnam. The Southeast Asia country has been a fast-rising star in the global manufacturing spot ever since China has been experiencing a fallout from its long-standing conflict with the West. In fact, Vietnam has been welcoming manufacturers keen to shift production away from China, among which includes Apple Inc.

For Apple, China has been its most prominent manufacturing hub due to various factors such as a well-trained workforce, low costs relative to the US, and a deep network of parts suppliers that are hard to recreate elsewhere without years of effort. In the meantime though, especially over the years, with the escalation of the trade war, Vietnam has slowly been rising to be Apple’s most important manufacturing hub.

It started with Vietnamese manufacturers having previously been contracted to make some of Apple’s flagship products including iPads and AirPods. Then when the Covid-19 lockdowns affected the supply chain in China, Cupertino gradually started shifting iPad production to Vietnam. Apple’s leading iPad assembler, BYD, is reportedly assembling the tablets at its production lines in Vietnam. The iPad will actually become the second line of Apple products following the Airpods wireless earbuds to be made in Vietnam. Now, according to Nikkei Asia at least, Apple suppliers Luxshare Precision Industry and Foxconn have started test production of the Apple Watch in northern Vietnam. With the level of sophistication required to make the Apple Watch, securing the deal would certainly spell good news for the country’s manufacturing sector.

Apple in Vietnam — A boon for local manufacturing?

The last few years, more so since the pandemic, global businesses started to diversify, to increase resiliency and connectivity of their supply chains and decrease reliance on a single country. All that led to Vietnam becoming a top destination for investment in manufacturing due to its strategic location and advantages in shipping, competitive labor, and production costs.

Especially when it comes to the assembling and manufacturing of tech products from smartphones to TV components, Vietnam has made its presence felt in the past decade. South Korea and Japan – both home to some of the biggest technology names – account for the largest chunk of US$376 billion of FDI, which came into the Vietnamese manufacturing sector between 2015 and 2020, according to one study. Last year, South Korean electronic giant LG invested more than a billion dollars in ramping up its OLED display output at the Vietnamese port city of Haiphong.

Overall, due to the shift in production caused by the trade war, Vietnam’s economy was boosted by almost 8%, according to an analysis of Nomura – a Japanese investment bank. Samsung already accounts for a quarter of Vietnam’s exports and even this year the tech giant reinforced its position as the largest exporter in Vietnam. US-based Intel has also set up its biggest chip assembly plant there.

When it comes to Apple, the tech giant has long considered building some iPads outside China, but the plan was delayed last year when Vietnam was virtually shut down by a massive wave of infections from the delta variant. It was a double whammy when China’s Covid zero policy also led to repeated shutdowns, affecting Apple’s production several times.

Frankly, Vietnam is doing all it can to attract American investors, with Prime Minister Pham Minh Chinh promising to smooth the way for those thinking of shifting there. At a recent meeting on the sidelines of the US-ASEAN summit in Washington, Chinh vowed to “completely solve” investors’ concerns. Oxford Economics predicts that around 4% of global electronic exports will come from Vietnam by 2025.

What also makes Vietnam a safe haven for manufactures is the fact that it is unlikely that the US would take any drastic tariff measures against Vietnamese exports as it looks at the Southeast Asian country as a manufacturing counterweight to China.