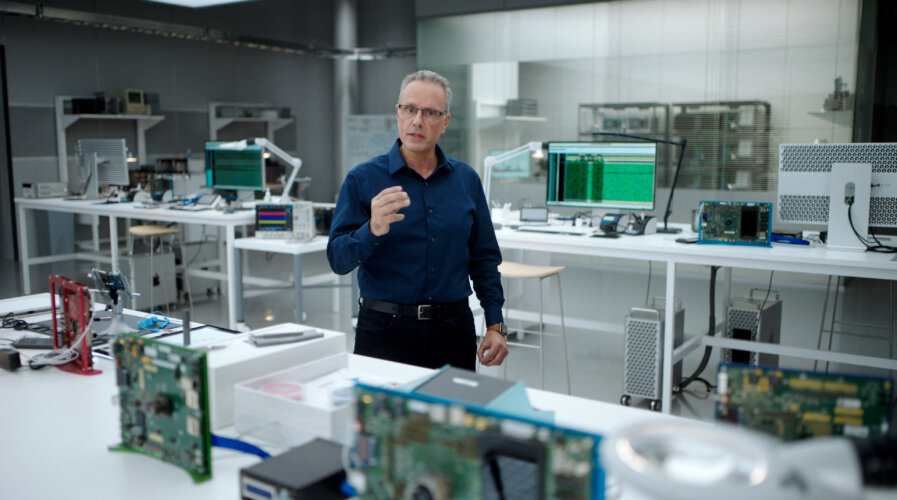 Is Apple ditching Broadcom, Qualcomm for in-house chips instead?This handout released and taken on November 10, 2020 by Apple inc. shows Apple’s senior vice president of Hardware Technologies Johny Srouji discussing the breakthrough performance of M1, the most powerful chip Apple has ever created during a special event at Apple Park in Cupertino, California. (Photo by Handout / Apple Inc. / AFP) / RESTRICTED TO EDITORIAL USE – MANDATORY CREDIT “AFP PHOTO /Apple Inc. ” – NO MARKETING – NO ADVERTISING CAMPAIGNS – DISTRIBUTED AS A SERVICE TO CLIENTS

Is Apple ditching Broadcom, Qualcomm for in-house chips instead?

Ramping up in-house capabilities has been a necessary shift for Apple Inc and when the Cupertino, California-based tech giant broke its 15-year partnership with Intel’s chips on its Macs in 2020, it signified a new direction. CEO Tim Cook has frequently said that the company has a “long-term strategy of owning and controlling the primary technologies” behind the products they make.

For the iPhone maker, controlling its own technologies helps it integrate its products more deeply. It also means that it runs its own schedule — chips take three years to develop, Apple senior vice president Johny Srouji said last year — and that gives them more control over costs. Truthfully, Apple has been working on in-house modem chip technology for several years now, with the aim of reducing its reliance on Qualcomm.

The initial plan was for Apple to introduce its own modem chips as early as this year, but Apple analyst Ming-Chi Kuo said in late 2022 that Apple would need to continue to rely on Qualcomm in the near future as Apple’s development efforts “failed.” At the time, Kuo said that Apple would continue working on its 5G chips, but that development would not be done in time for the launch of the 2023 iPhones, which Bloomberg’s report agrees with.

Apple’s efforts were stunted by prototype versions of the modems overheating, and that eventually led to the company deciding that it wouldn’t begin a switch to in-house designs until 2024 at the earliest. Since the modem chips development is still seeing delays, Apple will use a slow rollout to end its reliance on Qualcomm.

According to people familiar with the matter, Apple aims to ready its first cellular modem chips by the end of 2024 or early 2025. Apple will start with using its own modem chips in a single device before expanding the rollout to other devices. Overall, the transition away from Qualcomm could take up to three years from now.

Initially, Qualcomm had planned to only provide about 20% of the 5G modem parts for the new iPhones in 2023, but hiccups with Apple’s in-house modem results in the former retaining its foothold, according to comments that accompanied its earnings report last year. A statement at that time confirmed that Apple won’t be moving to its own in-house modem design for this year’s models.

But Qualcomm did share its forecast that it will only receive minimal revenue contributions from Apple in fiscal 2025 — which could well be the case if the latest development according to Bloomberg’s report turns out to be true. To contextualise the significance of Apple to Qualcomm’s business, 22% of the former’s annual sales stems from the iPhone maker. That amount represents nearly US$10 billion, though the company has warned for years that its reliance on Apple will wane.

Apple will not just ditch Qualcomm, but Broadcom’s chips too.

As part of the shift to replace the chips in its devices with homegrown components, Apple will also drop a key Broadcom Inc. part by 2025, according to the same report by Bloomberg. The move, should it be true, would be a blow to Broadcom, one of its biggest suppliers. The chipmaker makes a combined component that handles both Wi-Fi and Bluetooth functions on Apple devices.

Apple is also Broadcom’s largest customer, accounting for about 20% of the chip maker’s revenue in the last fiscal year, almost a staggering US$7 billion. The phone also has helped fuel growth at Broadcom, which refers to Apple as its “large North American customer” during earnings calls. Therefore, as Bloomberg puts it, “the moves will further upend a chip industry that makes billions of dollars supplying Apple components”.

The upside is that Broadcom supplies Apple with other components — including radio-frequency chips and ones that handle wireless charging. Even so, the iPhone maker is said to have been working on customizing those parts as well. Interestingly, to make it up for what both Qualcomm and Broadcom provide, the tech giant is already working on a version of in-house design that will combine cellular modem, Wi-Fi and Bluetooth capabilities into a single component.