While Singapore has been the ‘poster child’ leading the region’s digital wave, Vietnam’s digital push has been much under the radar. On top of the Vietnamese government’s digital-related initiatives – experts reckon the potential for blockchain and artificial intelligence (AI) development within the nation remains untapped.

Crypto-pawn platform DeFi For You’s CEO Adam Christopher Chaplin on a recent talk show in Hanoi said that this was a golden time to promote research, development, and application of blockchain technology in Vietnam. As a cryptocurrency expert and investor in blockchain application projects over the past seven years, he said that in the next two decades, blockchain would be the most important keyword in the technology world.

Overall, he reckons that the potential of blockchain and AI development in Vietnam remained untouched with many opportunities waiting to be explored in the future. Other experts at the event agreed that blockchain and AI development would be soon be facilitated in Vietnam thanks to the trend of digital transformation, advanced computing power, and the emergence of large data sets.

In fact, in just three years following decades in the digital wilderness, the traditionally agrarian nation has undergone a rapid transformation driven by “improvements to the digital identity, digital citizenship, and digital lifestyle components”, to the extent Vietnam has even developed its first AI-driven educational robot.

To top it off, over the last few years more organizations have started developing and applying AI in various fields. Including education, telecommunications, retail, healthcare, and others, which have not only gradually dominated the market but also earned huge profits.

Vietnam has set off in pursuit of a ten-year plan to become a middle power in the AI field. The plan is extensive but modest: by 2025 the nation hopes AI is “an important technology of Viet Nam” and “among the top four countries in the ASEAN and in the group of 60 world’s leading countries in research, development, and application of AI”.

Come 2030, the nation hopes to be in the top four in ASEAN and top 50 globally. The plan calls for the establishment of two national AI innovation centers, ten research and training institutions, and for AI to be “widely used in public administration, online public services to help reduce processing time, human resources, reduce the waiting time and costs of the public. 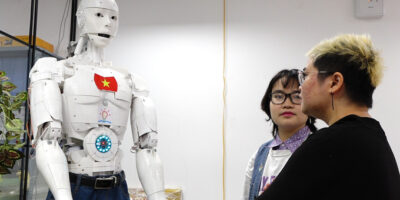 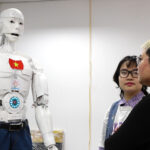 IS VIETNAM’S FIRST AI ROBOT THE FUTURE OF EDUCATION?

Between 2025 and 2030 the plan calls for the development of three national innovation centers for AI; ten renowned AI centers in the region; three national centers for big data storage and high-performance computing; connecting domestic data centers and high-performance computing centers to create a shared network for big data and computing for AI; fifty open, linked and connected data sets in different economic sectors, socio-economic fields serving the research, development, and application of AI.