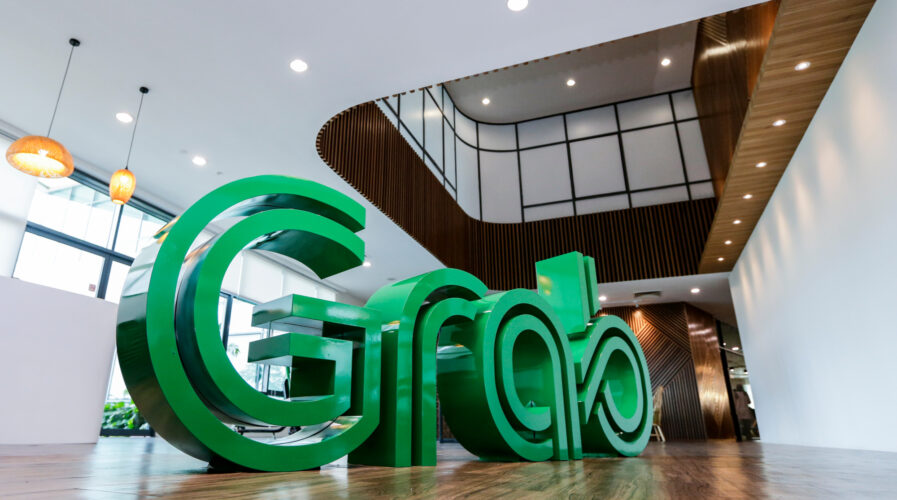 Grab, once a small Malaysian taxi-hailing app, has since become a decacorn eyeing a US listing of US$40 bil (IMG/Shutterstock)

Early Tuesday morning (16 Nov), thousands of Grab users across Southeast Asia were hit by an unprecedented disruption to the Grab superapp.

Posts and comments of confusion, anger, and desperation from irate and panic-driven customers filled social media as they demanded an explanation from their respective Grab entities for the unexpected downtime. 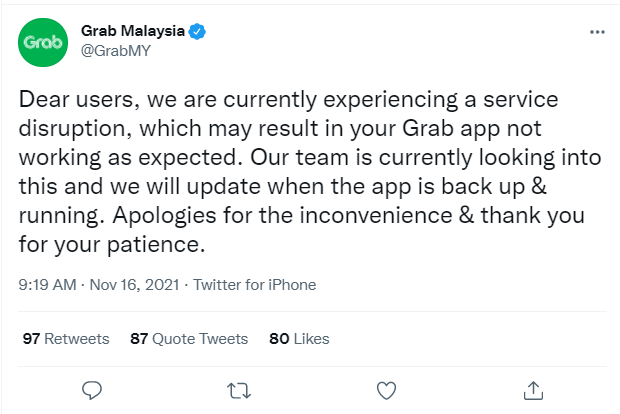 Users collectively complained of the inability to search for rides, choose pickup or drop-off locations, nor book rides on the superapp. Drivers were unable to receive jobs, including GrabFood delivery riders.

Complaints on Twitter brought up ripple effects of the hours-long disruption, such as loss of income for delivery riders and merchants; canceled food orders, as well as inconveniences to users, who ended up being late to work (including the writer of this article).

Update as of 2.45 pm: Services to the Grab superapp resumed between 11 am to 12 pm for Malaysian users, but it came with a barrage of angry tweets complaining about surge prices, which were as high as 2.5 times.

A cursory check by Tech Wire Asia found that the official Twitter Grab accounts for Malaysia, Singapore, the Philippines, Thailand, and Indonesia had posted about service disruptions from as early as 7 am (GMT +8) this morning, indicating that the downtime was a widespread regional issue.

On Twitter, “Grab” was trending, with over 115,000 tweets on the disruption as of time of writing.

It appears that this is the first time that it has happened to Grab’s superapp — or any superapp in the region, for that matter.

Grab, formerly MyTeksi, was first conceived and rolled out as a simple taxi-booking app in 2012 in Malaysia.

It is now a decacorn, and has greatly expanded its offerings to include a multitude of services in what it deems a “superapp”.

Today’s Grab superapp disruption comes shortly after the company posted net losses of almost US$1 billion (US$988 million) in its 2021 Q3 earnings report.

In a press release, the company cited a “decline in mobility due to the severe lockdowns in Vietnam” for its revenue of US$157 million — a nine percent year-on-year drop.

With barely a month to go to its US listing via a US$40 billion SPAC deal with Altimeter Growth Corp, these negative revenue performances might cause investors to feel uneasy.

Nevertheless, the company believes that opportunities for digital services will continue to expand in Southeast Asia, citing a recent Google, Temasek, and Bain report on the SEA digital economy which is projected to grow to US$1 trillion by 2030.

Is it game over for monopoly?

Grab is seen as a monopoly in the ride-hailing and transportation space for years, ever since they bought over their biggest competitor, Uber, in 2018. This resulted in a fine of SGD6.4 million for anti-competitiveness by a Singapore consumer watchdog.

Today, competitors are popping up, with its key rival for the Indonesian market, Gojek merging with Indonesian e-Commerce giant Tokopedia to form GoTo.

GoTo is expected to pose a threat to Grab’s weakened presence in Indonesia, as well as the SEA region.

With plans to be in the ride-hailing, food delivery, and fintech space, GoTo could possibly be the largest operator of these services in the SEA region.

In August this year, airline Air Asia unveiled the Air Asia superapp,  with a new ride-hailing service AirAsia Ride for users in Malaysia.

Irate users in Malaysia had resorted to AirAsia Ride and multiple other smaller players, due to the extended downtime this morning.

This turn of events reflects the high dependence Southeast Asians have on Grab, seeing how the decacorn’s main source of revenue is from ride-hailing.

With a dearth of other reliable players, it is indicative of the dangers of monopolizing the highly important ride-hailing space, especially when service disruptions of this scale happen.