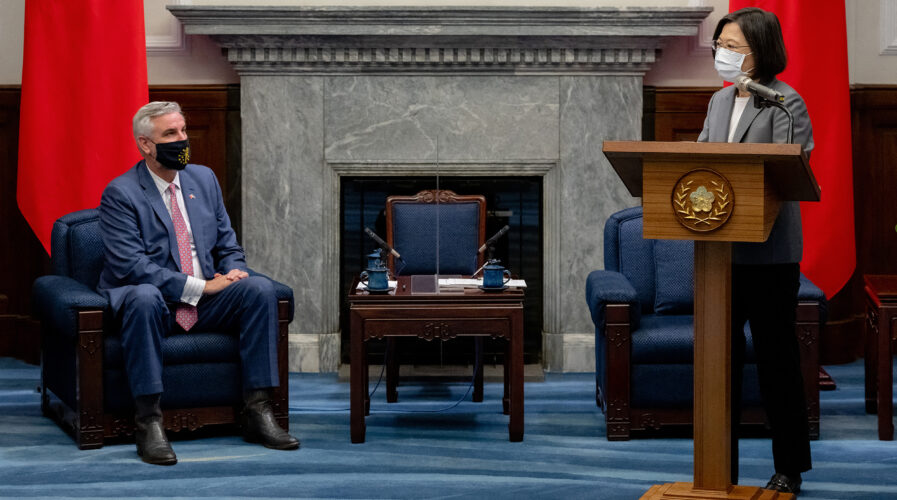 This handout picture taken and released by Taiwans Presidential Office on August 22, 2022 shows Taiwan’s President Tsai Ing-wen (R) speaking with Eric Holcomb (L), the Republican governor of the US state of Indiana, during a meeting at the Presidential Office in Taipei. (Photo by Handout / TAIWANS PRESIDENTIAL OFFICE / AFP) /

Democracy chips: Taiwan is reaching out to its allies to strengthen supply chains for semiconductors

Earlier this month, the most senior elected American official visited the island of Taiwan for the first time after almost a quarter century. The visit was surrounded in controversy, unfolding against the backdrop of an increasingly fraught US-China and China-Taiwan relationship. Since then, Beijing has ramped up political and military pressure on Taipei. Yet, Taiwanese President Tsai Ing-wen seems unperturbed. In fact, she voiced her intentions to ensure the allies of Taiwan have reliable supplies of semiconductors, or “democracy chips” — amidst the geopolitical tensions around them.

Just two weeks after US House Speaker Nancy Pelosi and a delegation of US legislators led by Massachusetts Senator Ed Markey visited Taipei, the governor of the US state of Indiana came to meet Taiwan’s President. The visit, considered a bold one, took place despite how Pelosi’s visits enraged China. Despite that, Taiwan rejected Beijing’s sovereignty claims, saying only the island’s people can decide their future.

When Eric Holcomb met Tsai on Monday after arriving on the self-ruled island for a four-day visit, the former had the aim of bolstering economic exchanges, particularly in the key semiconductor industry. In fact, during a meeting at her office in Taipei, Tsai said the US and Taiwan must stand together as “democratic allies” after the island had been confronted by “military threats” from China.

Tsai even referred to its semiconductors as “democracy chips,” and suggested democratic allies of Taiwan to step in and cooperate with the nation as it faces increasingly hostile and militant intimidations from across the Taiwan Strait. “Economic security is an important pillar of national and regional security,” Tsai told Holcomb. “Taiwan is willing and able to strengthen cooperation with democratic partners in building sustainable supply chains for ‘democracy chips’.”

Holcomb is also scheduled to meet representatives of Taiwan’s semiconductor companies on his visit amid an expansion of links between his state and the island, which is home to the world’s largest contact chip maker, Taiwan Semiconductor Manufacturing Co Ltd. Considering how Taiwan has cornered a massive share of the global chip manufacturing market, Tsai sees the country’s chip dominance as a vital role for the island’s diplomacy as threats from China mount.

For context, Taiwan is home to 92% of global manufacturing for the world’s most advanced semiconductors. Most of the world—including both China and the US—is dependent on Taiwan for the island’s semiconductor capacity.  TSMC alone accounts for more than half of the global market for made-to-order chips. In her recent visit to Taiwan, Speaker Pelosi met with TSMC chairman Mark Liu to discuss plans for the company to build more factories on US soil. As it is, the US currently represents TSMC’s largest market share.

Pelosi’s visit also resulted in China aggressively curbing trade with Taiwan by limiting imports of fish and fruit. Semiconductors were conspicuously spared from the package, given China’s reliance on Taiwanese chip manufacturing. China has also been unhappy with the passing of US landmark CHIPS Act, considering how the Biden administration has singled it out as an urgent priority in US competition with Beijing.

While chip makers in general welcomed Washington’s long-awaited passage of a bill to provide funding for the US semiconductor industry, they are torn in between as accepting those subsidies could tie their hands when it comes to future investments in China. Which means, chip giants like South Korea’s Samsung Electronics and SK Hynix who both have presence in the UK and China, will be restricted from shipping new technology tools to factories they operate in China.